Volunteers Make the World Go Round 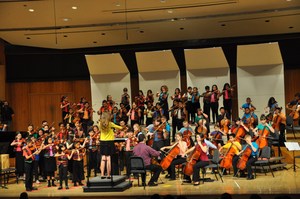 If you ask around Robla about John Reven, you'll get a slew of answers, "He runs the fundraisers," "he helps with the Strings program," "he helped me get my class some science sets!" No matter who you think he is, here is a little peak at the man who has been helping our little district for nearly 30 years.

If you have spent any time in any of the schools in the Robla School District, you have certainly seen the smiling face of Mr. John Reven and wondered who he is and what he does for our district. While he is not employed by the school district, he has been a dedicated parent volunteer for nearly 30 years!

When their son Justin was enrolled in Kindergarten in the district in 1991, John and his wife, Cindy, began volunteering in the classroom. A few years later they had become parent volunteer coordinators and started a school store.  John’s efforts did not stop there, and soon he was volunteering at all of the schools.

“I met John when his sons were in elementary school and had the privilege of teaching his and Cindy's son, Brenden,” said Laura Lystrup, now Principal of Robla Preschool and Director of Special Education. “During that time, John began to explore ways to help students with special needs beyond the classroom. He expanded our knowledge of community programs for students with learning differences and became active in SCOE's Community Action Committee (for differently learning students).”

Throughout the years, John has helped the district in a variety of ways. Not only has he helped students with their work in the classroom, he also helped get computers donated for students to use. From the beginning, John has served on Robla’s school site council, district advisory committees, and even dresses as Santa Claus for the Robla Preschool winter celebration. He has also been instrumental in many of the fundraising programs and kick-off activities within the Robla School District.

“At the height of my fundraising,” John said, “I would also include a 15-reading assembly with the kick-off activities to illustrate the necessity of being able to read proficiently and what they would be able to accomplish long-term by being able to read.”

In 1998 John was among 25 members of the Robla community who founded the Robla Education Foundation (REF), and is the only founding member still on the foundation. The REF helps raise funds for things such as student resources, field trips, and the Robla Strings program. From overseeing the REF Golf Tournaments and fireworks booths to aiding the Strings program, John’s efforts help students financially throughout the district.

When asked about his favorite saying, John states, “Education Starts at Home.”

John Reven is a rare individual.  There are many community members - parents, neighbors, business owners, who become involved in the work we are doing in the Robla School District.  Very, very few stay involved over time and even fewer become involved to the degree that Mr. Reven does.

"John's commitment to the students in this district is evident in a number of programs and activities," Superintendent Ruben Reyes says.  "The Robla Education Foundation, the Strings Project, and the development of our LCAP document each year are just a few examples.  His time and energy are important resources in so much of what we do.  We are so fortunate to have him."

Despite no longer having children or grandchildren attending a school within the district, John is such an integral part of the Robla community that many of the programs he is involved in would not exist or be where they are today if not for his dedication to the children in the district.

Having served in the United States Air Force and being a retired Air Traffic Controller, John likes to keep busy. When he had some spare time for himself, John used to enjoy fishing in the mountains, hunting, and traveling. He can also be seen at the occasional River Cats game or in a weekly bowling league with other district staff bowlers.

Asked if he has plans to cut back or stop volunteering any time soon, John simply says, “No.”

“I am most grateful that he sees the Robla Preschool as essential to enriching children's sense of wonder and learning through doing,” Laura Lystrup exclaimed!  “Great Dads make Great Volunteers.”

Parents like John are few and far between and there are not enough awards to truly honor his time and dedication. If you would like to volunteer at one of our school sites, please inquire at the school front office.  We are always on the lookout for more dedicated parents like John Reven.